As doc-links can be used in facts to link your argument to substantiating evidence, that can frequently lead to a tree of connections, like this: 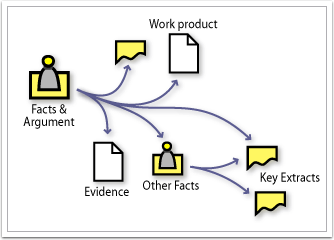 Those leaves are often just a subset of the evidence in the case. And sometimes, you need to track down all the references, direct and indirect, that your arguments rely on. For example, the 5 leaves comprising the 'other facts' and the documents which the extracts came from in the diagram above. 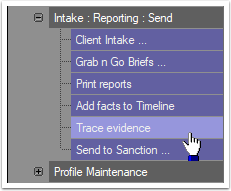 There are two results categories shown. The first, Results (shown collapsed), shows the trace for the selected fact ('Red Fact Trace') including all referenced documents, extracts, and additional facts. The second, 'Results - Source documents of found extracts' lists the five source documents of any referenced extracts that were found.